The site is located in an strategic and evolving district. The topography of the area is characterized by the long plain and the scattered hills. The location proposed is a highly transformed lot, a natural hill modified resulting in a physical barrier between the north side of the site, where the Dalseong Sports Complex Park is located, and the south side, connecting with the new developments. The singular shape of the lot, an irregular six sided polygon, where none of its sides have the same elevation, makes it challenging to conceal the new sport and cultural facilities with its surroundings.

The principal idea of the project is to consolidate the boundaries of the site, responding to each of them specifically while surrounding a natural open space that is the heart of the proposal.

We take advantage of the particular characteristics of the lot, its irregular geometry, its dramatic topography and its singular location in the city. The building sometimes contains the terrain, sometimes arises to generate a representative facade to the city, sometime bridges to allow the circulation underneath to get to the interior open space, all in an spiral ascension, to the point when the building wraps into itself, roof becomes ground and ground becomes roof while a fluid circulation happens around the green core of the building.

By doing so we allow most of the site to remain open, creating a new park for the district connected to the existing sports belt to the north, blending the building with nature, blurring the limits between interior and exterior. From the park, the various activities hold in the interior of the building can be overseen, enticing people to participate, while from the sport court, trees and people enjoying nature is the panorama that the athletes can enjoy.

The north wing of the building houses the main entrance to the facilities, opening to the interior court. It also serves as an exterior wide ramp to access the terrace on the second lever. The program dedicated to the sports facilities, containing the multipurpose room, the daily sports area, the stage and preparation room is located in the east side of the lot. It has been resolved as a semi-buried space 12m tall illuminated by high windows facing east and west that allow the natural light to enter, but prevent the direct sun to hit the badminton players. By locating these spaces underneath the ground level a higher thermal efficiency is achieved.

By this operation we also reduce the visual impact of the building on the site, potentiating the natural appearance of the intervention and rendering it lighter.

The sports bay is composed by two different areas, a leveled area that can host up to five badminton courts and that also can be transformed into a multipurpose space for other sports or cultural activities, and a terraced part formed by five stepped platforms that can fit five badminton courts and other cultural activities serving as a informal amphitheater.

Both parts are open to the upper level, the stepped area for spectators, that communicates to the exterior ramp that leads to the second floor.

The bays above the ground have a much lighter character. They could be considered as covered ramps that host the leisure part of the program while surrounding the interior garden.  A series of lounge areas, cafes, exhibition spaces form a sequence of spaces that rise to reach the higher level, an open terrace overlooking the near hills and the distant mountains.

The building can be circulated from bottom to top, inside and outside, responding to the different needs of the users, can be a challenging running track, or a pleasant walk from the garden going up, surrounding the tree tops to the upper lever terrace with a view.

The green core acts as an activity catalyst, a flexible space to host cultural and sports events, open to the community and to the whole district population. Many different activities can take place there, open cinema, concerts, exhibitions, children’s activities… It is visible from all interior spaces of the sports facilities, but it is always open to the public, a local park in an iconic building that transmits great pride not only for the community but for the district. 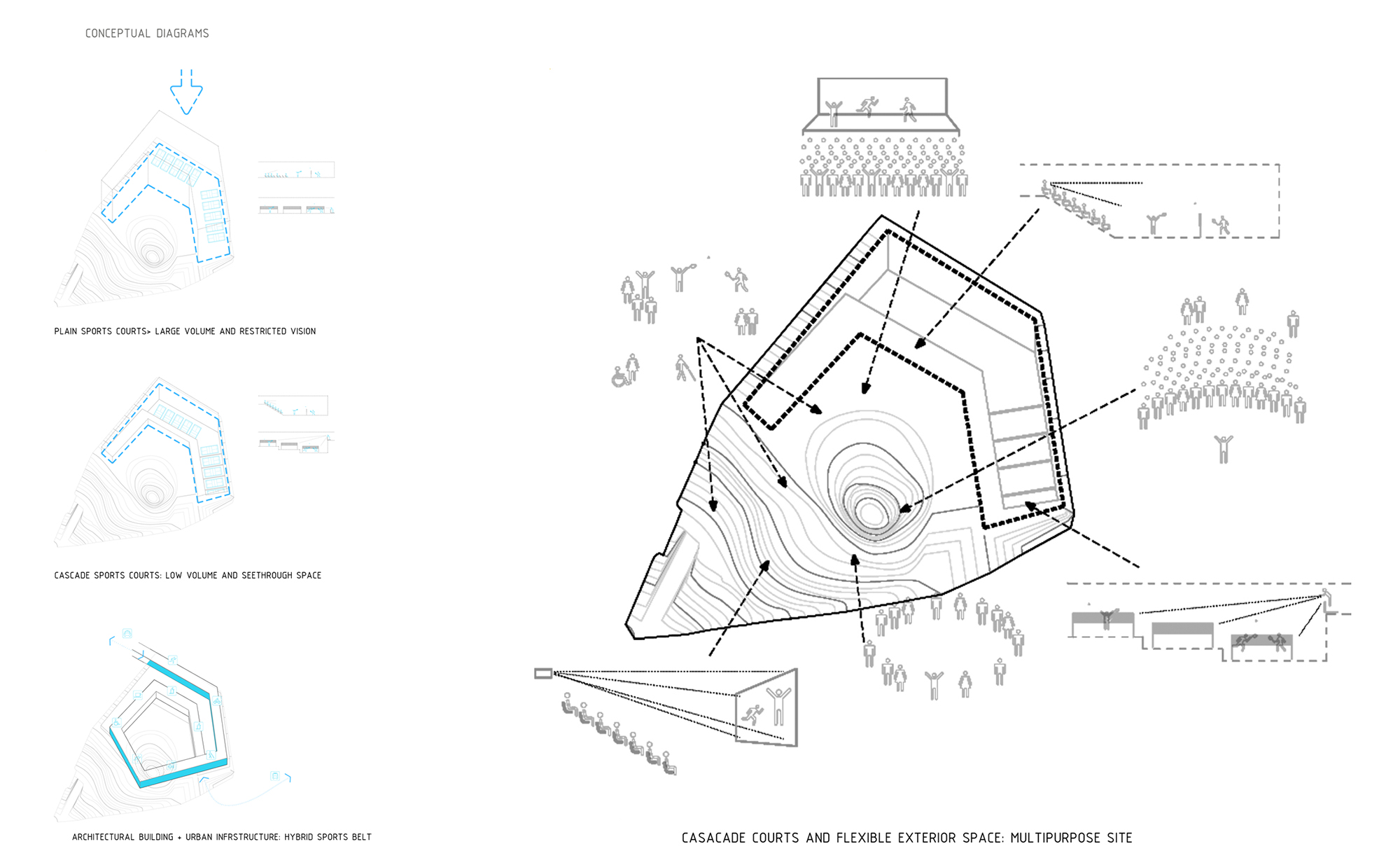 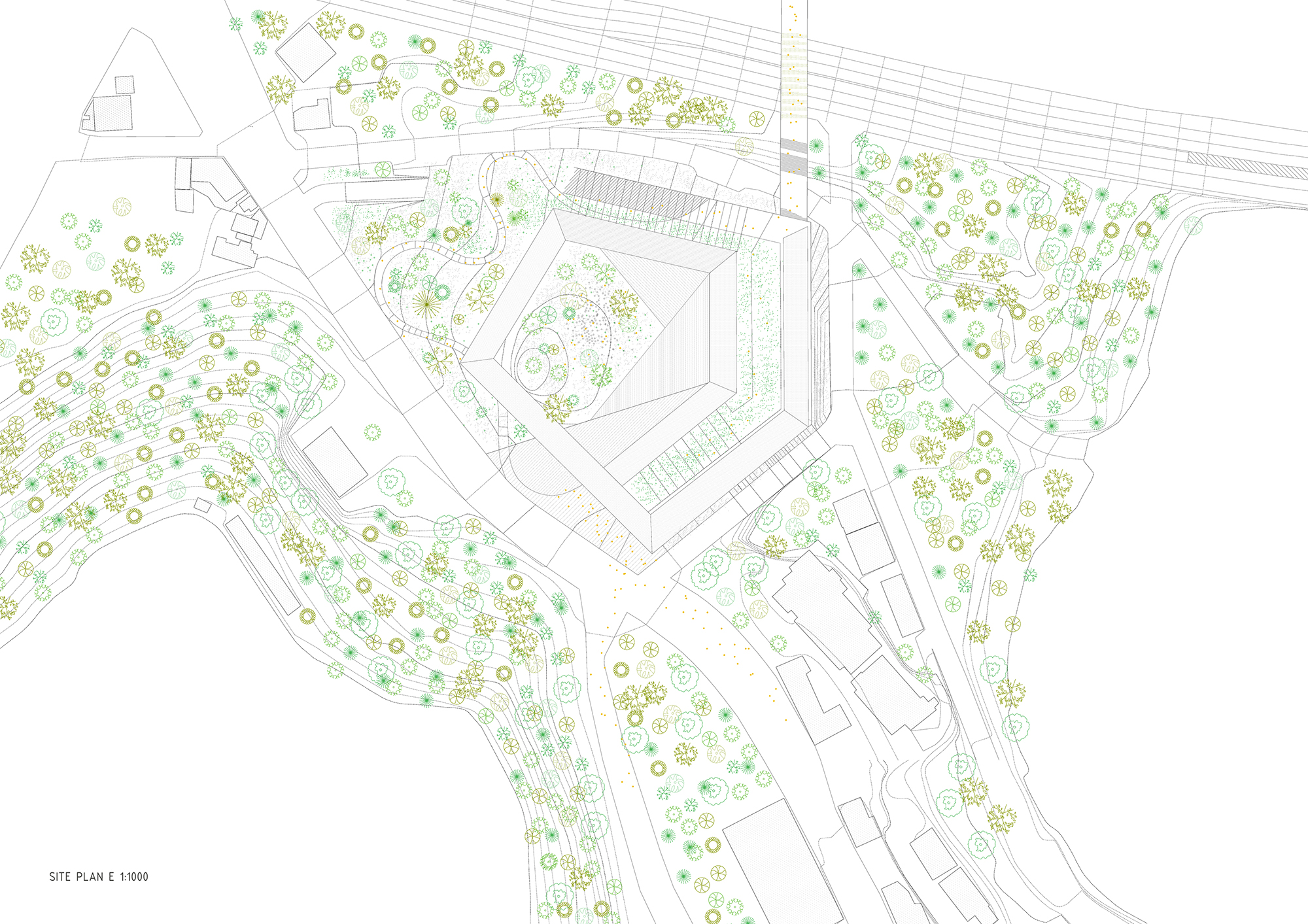 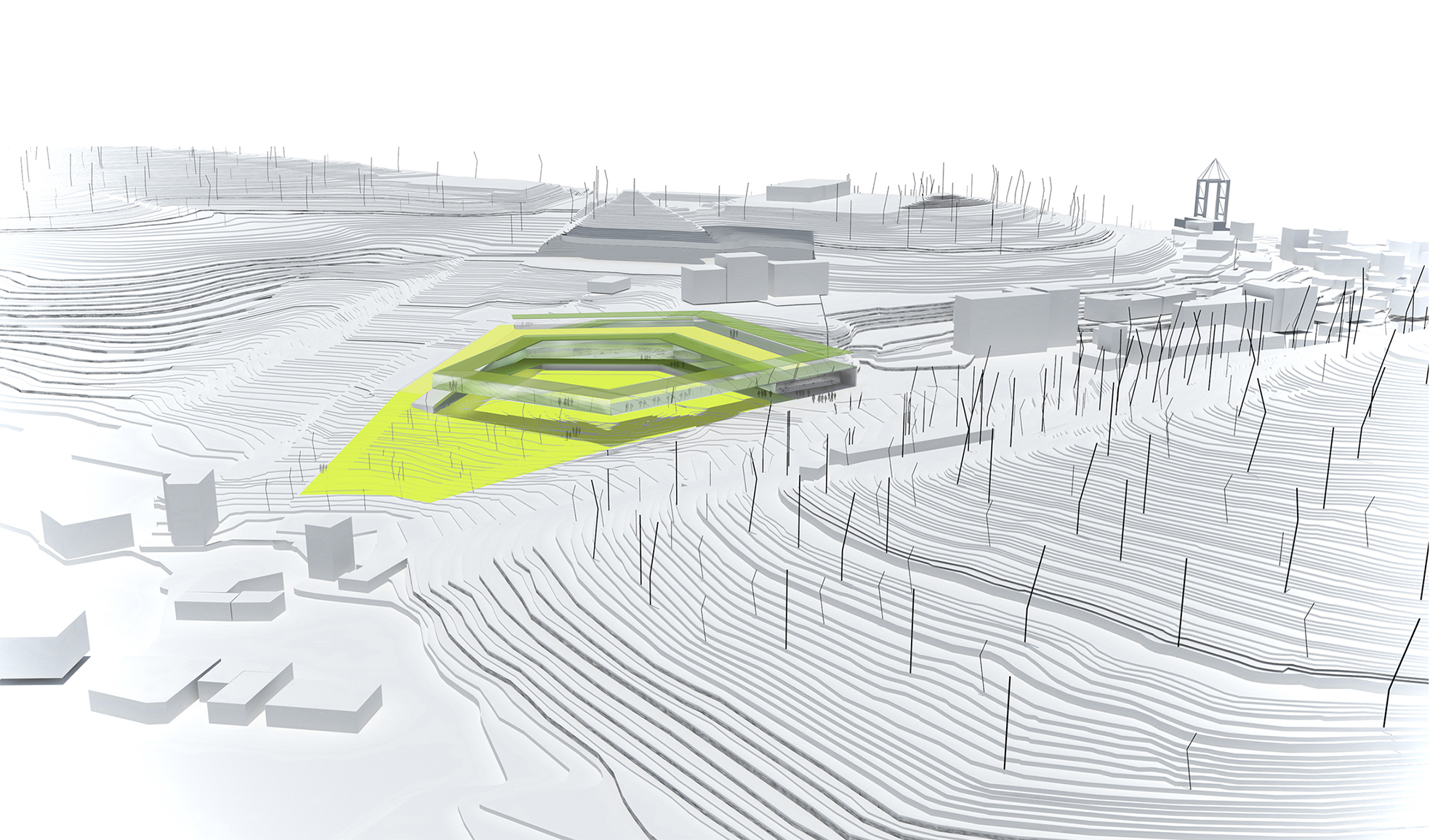