Next friday 27th Iñaqui carnicero will be lecturing at M.I.T. “Second hand Spaces”.

By Iñaki CarniceroSeptember 20, 2013 No Comments 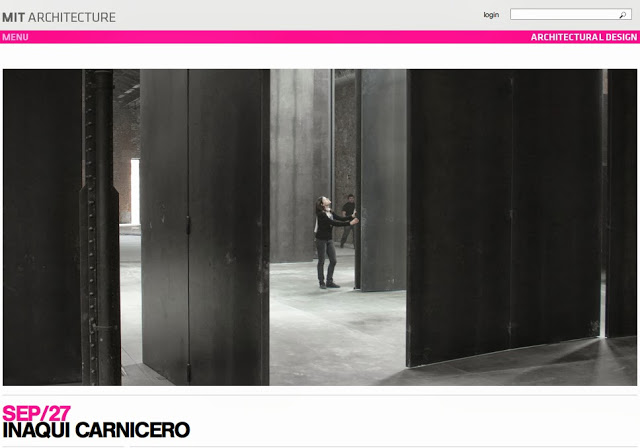 Two extreme architectural situations have been embraced in Madrid in the last 15 years. First came a short period of time when the city invested more in infrastructures and public buildings than any other term in history. After the excesses committed during the first period, an economic crisis is currently transforming design strategies and fostering interventions in the existing heritage. Building from scratch without considering what already exists is not an option anymore, and thus this new consideration of reality is promoting new directions in design.
Rome is a perfect precedent to demonstrate how it is possible for a city to be built and destroyed over the years while reusing almost the same materials. Some of the most important spaces in the city, such as the old temples and monuments, were reused in medieval times, frequently with humble programs far away from the sublime purposes for which were originally erected. In other cases the trace of destroyed ancient buildings have remained as the footprint of new constructions. This enticing dialogue between the past and the present is only possible when design provides a bridge of connection.
Considering time factors necessary in today´s society, it doesn’t make sense to talk about sustainability if we don´t first consider our buildings´ functional behavior over the years. Transformation, adaptation and reuse are some of the strategies considered in our office to respond to the constant changes of our “liquid society.”
The lecture “Second Hand Spaces” will demonstrate projects built by the office in the last ten years. Specifically we will show how cities´ economical and political contexts offer unavoidable constrains, but which can be taken as an asset towards the production of a resolution. The projects will be framed in three categories or actions: redefining, reusing and adapting

Visiting Assistant Professor, Cornell University, Ithaca, NY
Active in both the academic field and professional practice, Iñaqui Carnicero has been an Associate Professor of Design at the School of Architecture, Polytechnic University of Madrid for 13 years, the Gneser Visiting Critic at Cornell University in 2012, and is currently a Visiting Assistant Professor. A year after graduating, Carnicero earned his first commission through a competition for the construction of a university building in Madrid, which was accompanied by his participation in teh 2000 Venice Architecture Biennale.
Carnicero has won several competitions and completed many projects including: CEU University, 40 social housing in Mdrid, a high school in Albacete, the restoration of an Arab tower in Guadalajara, the new District Attorney’s Office in Madrid’s City of Justice, Hangar 16 Matadero-Madrid at a former slaughterhouse in Madri, and the Pitch’s house.
He has lectured at prestigious institutions such as Cornell, Rice, Berkeley, NJIT, Carleton, Roma Tre, La Sapienza, Calgary, Cervantes Institute in Prague, London Roca Gallery, Barcelona La Salle, Madrid ETSAM, Sevilla, and Navarra.
Carnicero is director of “Symmetries,” an architecture platform that relates Roman and contemporary strategies in the city. His PhD dissertation focuses on Louis Kahn and Robert Venturi’s discoveries and connections with Rome.